The performance, tasks and main characteristics of infant development 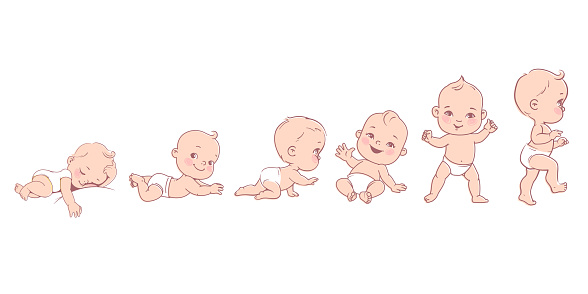 Infant development refers to the process of an orderly, continuous, phased, and gradual process from differentiation to complete psychological changes from the beginning of life, influenced by factors such as genetics, environment, and learning.

(1) The performance of infant development

The physical and mental development of a baby has its own independent characteristics. It is not a shrinking adult, and its body proportions will change significantly during growth and development. For example, the head of the fetus accounts for 1/2 of the body length, the baby accounts for 1/4, and the adult accounts for 1/8.

During the development of an individual, the old characteristics will disappear due to maturity, such as the loss of deciduous teeth in early childhood.

In the learning process, babies will gradually acquire some new abilities, such as curiosity, questioning, and physical permanent teeth.

(2) The task of infant development

In the process of growing up, babies need to have different performance behaviors in the social environment and find suitable roles in different hair stages, which need to complete the following "tasks".


(5) Learn to recognize one's own organs and behaviors related to gender.

(6) Learn to interact with people and control emotions.

(7) Learn to judge right and wrong.

(9) Form a simple concept of society and individual.

(3) The main characteristics of infant development

(2) The growth and development of infants have a certain order and direction, and they cannot leapfrog development. For example, the development of physical and motor skills in infancy follows the rule from head to toe.

UNICEF defines childhood as 0-18 years old. According to our country's living conditions and education, the development process from birth to maturity (0-18 years) is generally divided into six stages: infant, infancy, preschool, school age, juvenile and adolescence.